Toxtronyx has realised their game “Bridge2!” on the powerful Unity engine. Very realistic visuals and lots of new features as well as the possibility to create one’s own levels helped create a completely new game.

More than 50 diverse missions with increasing levels of difficulty are waiting for the virtual builder. The player can make use of the 20 original and authentically designed construction parts. As both a constructer and a structural engineer he gets to decide which of the three specifications of those construction parts he is going to use. Particular highlights are the special features such as reinforced concrete and counterweights. By using these elements you can build never before seen constructions such as balance beam bascule bridges, folding bridges and reinforced concrete bridges. The player can not only develop new bridges but also repair or complete previously initiated projects.

It is an exciting challenge constructing bridges with the given limited budget and to prove its static load-bearing capacity during different realistic endurance tests. In Bridge! 2 the developers win you over with a completely new, very realistic physics engine.

By advancing in the game you can unlock up to six different scenarios in a train and street variant each. The extensive, integrated editor enables the player to use these tools in his own missions. Players can publish their missions on the internet, thereby ensuring a steady flow of new tasks.

The soundtrack in Bridge! 2 comes from the well-known game composer Sven Gerlach who joined forces with the developer team again. Thanks to his catchy melodies, Bridge! 2 is now a real treat for your ears as well.

If usual Trucks are too small for you take a look at the Transport Simulator. Haul oversize load like wind tower segments, generators, yachts, excavators and locos. Completing your tasks will also influence the game world. Navigate through dense cities, wide highways and narrow country roads with five different vehicles.

For indepth informations and the option to buy visit Excalibur Publishing:
http://www.excalibur-publishing.com/collections/software/products/transport-simulator 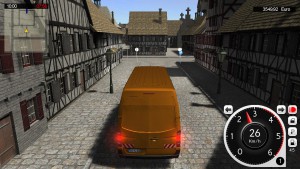 Starting with a simple van and some easy tasks like road blocks and deliveries start building up your company and buy more specialized vehicles fitting to more complex tasks. Broken streetlights? Trees need some cutting? No problem with hydraulic platform. Drainage channels have to be cleaned? There is also a vehicle available for this task. Upgrade your gear and your company and allways keep an eye on the streets and your fuel consumption.

The english version is still available for example in the Workmen Double Pack at Excalibur Publishing: 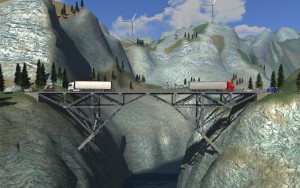 Bridge! lets you be a structural engineer and a construction manager in one. Master the mystery to bridge with a limited budget and limited numbers of parts to divide and to ensure a smooth operation.
30 varied missions of increasing difficulty are waiting to be solved with your own personal architectural masterpieces.
Conquer the challenge posed by the clever use of 15 different component types. In addition to simple iron and steel struts, suspension cables and hydraulics are waiting to be used for folding and hanging bridges or build combinations.
But just to construct is not enough. Different demands from simple road to heavy rail freight traffic over to the passage of ships are just the beginning. The biggest enemies will be forces of nature such as floods, storms and earthquakes. Will your bridge stand up to it, or will it end in disaster?
Your efforts should not remain unrewarded. Through the successful completion of missions you will unlock new parts and scenarios for the integrated mission editor. Create new challenges and share them with your friends.

The first commercial addon for TML Studios’ City Bus simulator 2010 has been created by us.
Regiobus Usedom adds around 18km driveable roads and one new bus.
For indepth informations and the option to buy please follow this link:
Regiobus Usedom at Aerosoft shop

If you want to buy it bundled with TML’s CBS 2010 use this link:
Bundle at Aerosoft shop